I remember this day so well. It was exactly one month before she was diagnosed. She was miserable and lethargic, uninterested in anything fun. I chalked it up to teething and wore her in the Boba carrier all morning.

As I scroll through the thousands (yes, thousands) of photos of Lily on my phone, I automatically categorize them in my brain as “before diabetes” and “after diabetes.” I often stare at the images taken in the weeks before her diagnosis like a detective looking for clues. I remember during the months before her diagnosis how parenting seemed to suddenly get so much harder. Now when I look at photos from that time, I see a somber kid who was acting out (or acting lethargically) because she felt horrible. It was the only way she knew how to communicate. Her pancreas had started to fail, but she had no idea what was happening to her.

To counteract this sudden strange behavior from my normally chill and happy 1-year-old, I started coming up with all sorts of super fun activities to try and snap her out of the “funk” I thought she was in. Here’s a perfect example. I decided I’d let her finger paint INSIDE when she woke up from her nap after a morning of uncharacteristically unruly behavior. It was too cold to go outside and surely she was just acting out because she was a bored toddler. I used to love these photos of her, but now I just see the dark circles under her eyes, her pale skin, her body shutting down. When I look at these now, all I can think is, “I wonder what her blood sugar was.” 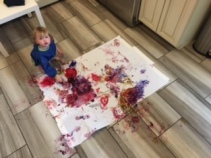 Lily was diagnosed on a Thursday, exactly one week after we embarked on a big road trip to go camping at Sand Dunes National Park in our home state of Colorado. It felt like huge undertaking with an 18-month-old, but we have always wanted our kids to be exposed to outdoor adventure and travel, because it’s what we love. Looking back, I would have never taken her if I had known what condition she was in. She did surprisingly well on the trip, though. I did notice that she ate like a grown man and drank water constantly while she was awake (definitely symptoms of type 1). But, I was happy because she doesn’t always have the best appetite. I know when I’m camping and outside 24 hours a day, I get hungry and thirsty too, I justified. She had a lot of extremely heavy wet diapers, but that was because she was drinking so much water — it made sense because we were in the desert in the summer. There were a couple instances where her eyes seemed to be really bugging her and I though it was from the bright sunshine and occasional blowing sand; I know now it was probably blurry vision from a really high blood sugar. I made justifications galore. Despite all this, she had a blast. She played hard and she slept hard. She made friends with some older girls at the campsite near ours and had s’mores one night with them. It was adorable, but I now cringe thinking what that must have done to her already untreated high blood sugar. We got back on a Sunday and 4 days later she was diagnosed and rushed to the ER – you can read more about that here. 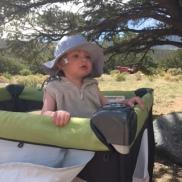 Watching as mom and dad set up camp. 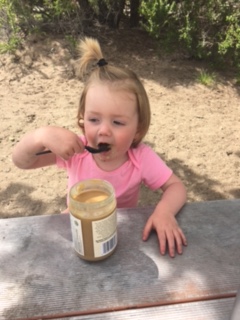 She pretty much ate this whole jar over the course of a few days. 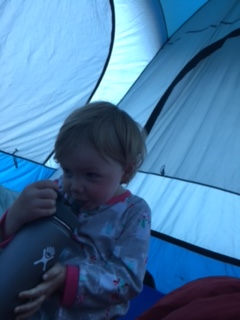 Chugging water in the tent as soon as she woke up.

Having the time of her life! 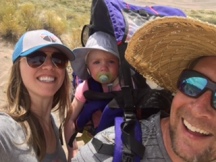 When I see pictures from farther back, before her body began to betray her, I am filled with a sense of sadness and longing for simpler times. When she could snack freely, or eat ice cream without such careful planning beforehand. When I didn’t have to do complex calculations every time she ate, or went outside to play. When she didn’t have two medical devices attached to her tiny body at all times (pre-robot Lily). When we all slept peacefully through the night, with no finger pricks, no emergency juice boxes or honey sticks, no middle-of-the-night injections, failed pump sites, etc.

Here are some pictures from around her first birthday. I don’t think her symptoms started showing up until she was about 15 or 16 months old (though very subtle even then, until her diagnosis at 19 months).

Eating a healthy banana smash cake on her first birthday. 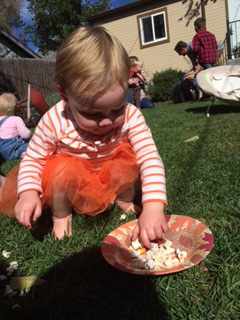